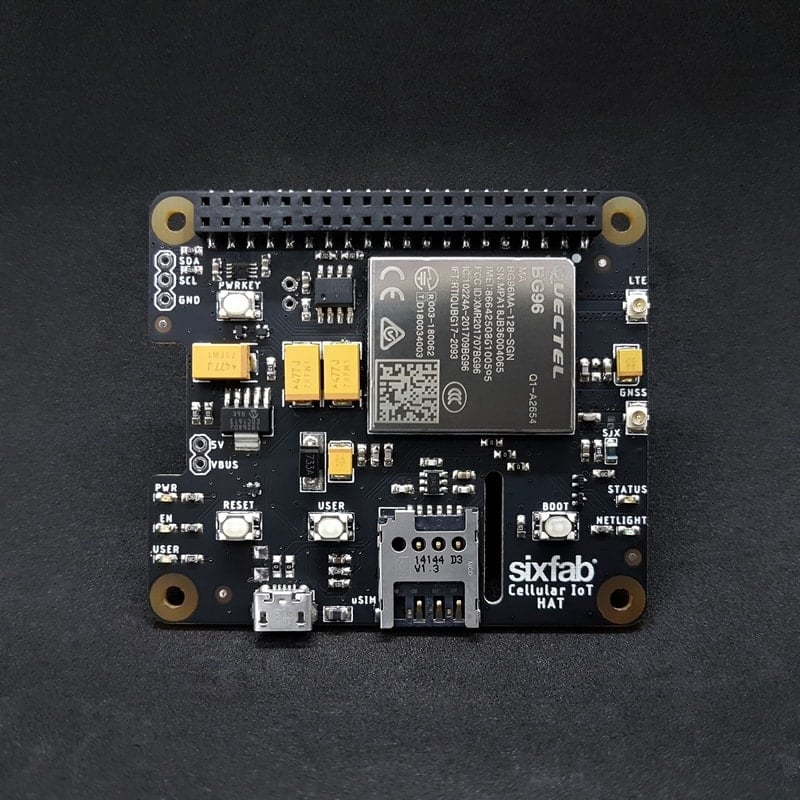 This is an add-on for Raspberry Pi that has combined LTE technologies Cat.M1, Cat.NB1 (NB-IoT) and eGPRS for Raspberry Pi, based on Quectel’s BG96 module. The shield has the power of the new IoT phenomenon LPWA (Low Power Wide Area) with Cat.M1 and NB-IoT connection functionalities. Besides, it also provides the function of eGPRS that be enhanced version of classical GPRS.

The module on the shield has GNSS (GPS, GLONASS, etc.) functionality for the need for location, navigation, tracking, mapping and timing applications.

With the Sixfab Raspberry Pi Cellular IoT HAT, you can send or receive data over LTE-M and NB-IoT cellular networks without needing gateways. LTE-M (Cat M1) and NB-IoT (Narrowband IoT or Cat NB1) are both for who is looking to take advantage of Low Power Wide Area Network (LPWAN) technology. In the meantime, the 2G networks have been started to shut down in some countries.

The Quectel BG96 lies on the middle of the Raspberry Pi Cellular IoT HAT, is a series of LTE Cat M1/Cat NB1/EGPRS module offering a maximum data rate of 375Kbps downlink and uplink with worldwide coverage. This LTE add-on for Raspberry Pi also supports GNSS and GPS for the need for building location, navigation, tracking, mapping and timing applications.

At this LTE HAT for Raspberry Pi, we’ve provided an easy-to-use Python library for AT commands over UART or USB connection with a bunch of tutorials enable makers, engineers, integrators and developers to easily design their applications.

Updated about 2 years ago