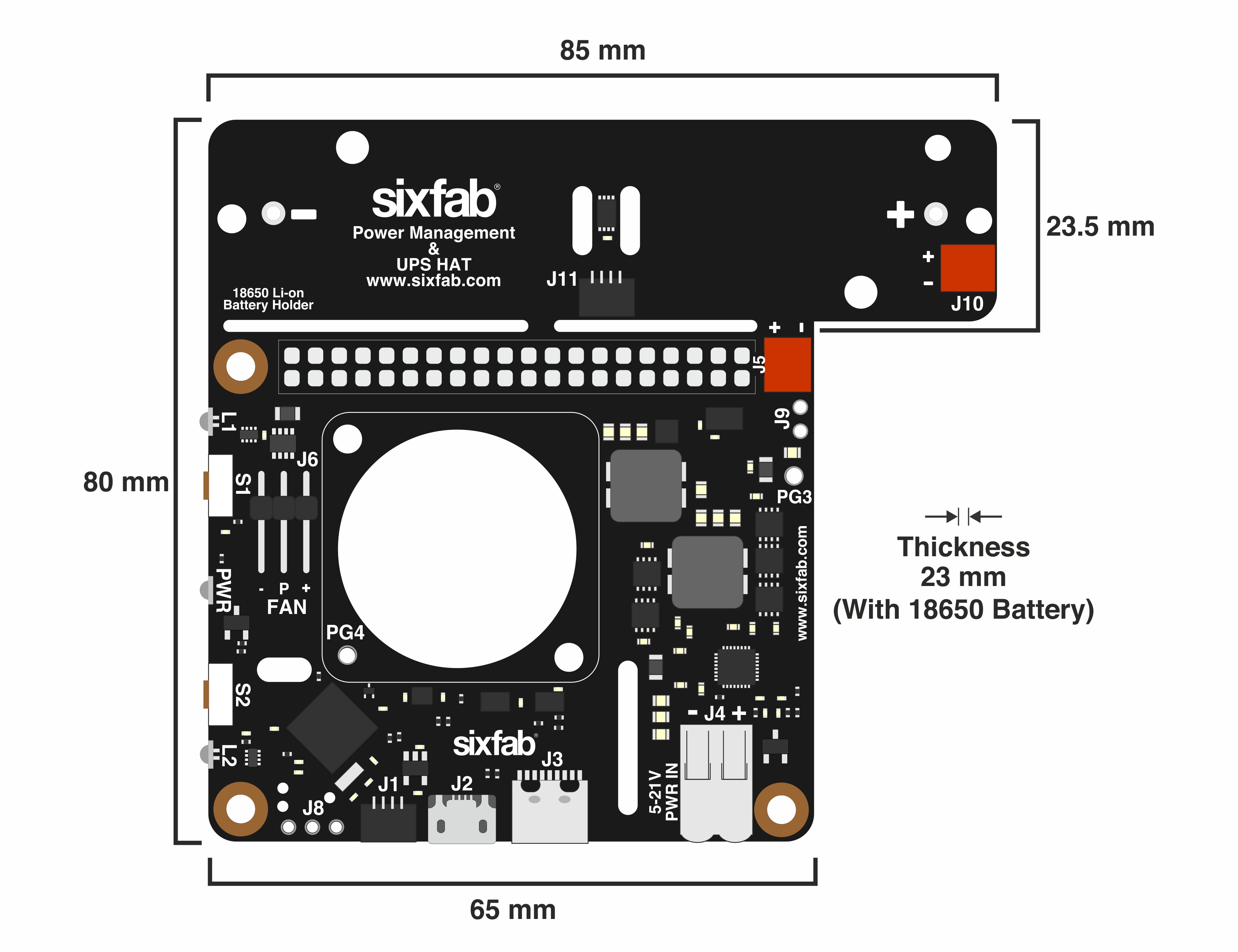 You can download the 3D design files of the Sixfab Power Management UPS HAT from github repository.

The HAT comes with an integrated Protected 18650 Li-on battery holder without a battery. It can be breakable if needed to use it in a different placement. Then you need to use the battery cable included in the package to connect the battery to the mainboard via JST- SFH connectors(J5 and J10)

You can plug an external single-cell 3.7V Li-on or Li-po rechargeable batteries when bigger capacities or special dimensions needed. Use JST-SFH connector(J5) with a suitable battery cable with it or you can solder cables to battery header(J9) by paying attention to the polarity.

There are two right-angle push buttons(S1,S2) at the edge of the HAT.
The default behaviors of the buttons are as follows.

*Note: The pogo pin needs to be soldered for soft power on. Click more details.

There are three LEDs on the HAT as two of them are programmable RGB.

The Qwiic cable and the qwiic connectors(J1-J11) on board are used to read the temperature of the battery holder card when battery holder broke off from UPS HAT.

The UPS HAT uses 0x41 I2C address. The sensor on the battery uses 0x48 i2c address. Make sure it is not conflicting with another device using the same address.

This installs two services,power_agent and power_request which provides communication between the UPS HAT and the Power Software Platform.

Note: The power_request service must be running for the power_agent service to run.

Functions dependent on the power_agent service

While using the following functions the agent service should be active.

Watchdog is a power software dependent function. If the power_agent service shuts down or freezes in any way, it restarts the Raspberry Pi at the end of the watchdog interval value set.

The UPS HAT can be operated in 2 power modes as follows:

LPM(Low Power Mode)
This is an energy-saving mode. L1 LED turns off. L2 LED blinks at an interval of 10 seconds indicating the charge status.

To enable/disable the low power mode use set_lpm_status(status).

EDM (Easy Deployment Mode)
This mode is to save the battery after development to deployment.
It allows the Raspberry Pi and it’s peripherals to sleep while powered through the battery. Thus, it provides long-term use without consuming the battery before deployment.

Activating the Easy Deployment Mode will turn off all LEDs of the HAT.

Connect the power source to UPS HAT to exit EDM.

Note: EDM is not active when any one of the power sources(J2, J3, or J4) is connected.

The default behavior of the UPS HAT is defined as follows:

Updated over 1 year ago